Bob Goebel’s first encounter with a Messerschmitt occurred, not in the skies over Europe, but in his own hometown of Racine, Wisconsin.

A German fighter with a yellow engine cowling and white number four on the fuselage was downed during the Battle of Britain.  It was brought to the U.S. on a fund-raising drive for the war effort, arriving in Racine after Bob Goebel had enlisted in the Army Air Corps and was awaiting orders to appear for training.

The incident is described in his book:

“The day was cool and rainy as I walked the two and a half miles from home to downtown.  A captured Messerschmitt had been set up in an open park on the lake front, just behind Hotel Racine, as part of a touring display.  The purpose was to stimulate interest in Bundles for Britain, or Lend-Lease, or some other such case of which I had scant knowledge and less interest.  But that plane interested me.

A wooden platform with steps had been set up beside the cockpit, and there was no admission charge; it was free.  The attendant, an RAF sergeant, was deeply engrossed in conversation with a young lady, the only other person around.  He waved one arm perfunctorily, as if to say, “Help yourself; I’m busy right now.”

I walked around the outside first, impressed by everything–the large identification crosses on the sides of the fuselage, even the small legends printed in German at various places.  Then I climbed the stairs and leaned in as far as I could, staring at the instrument panel, the controls, and all the knobs and levers. When I looked for the sergeant to ask him something, he was crossing the street with the young lady, heading for a nearby coffee shop.  Well and good. The “Do Not Enter” sign surely did not apply to me.

I threw a leg over the cockpit edge, climbed in, and sat down.  I grasped the stick, put my left hand on the throttle, slid my feet forward onto the rudder pedals, and sat transfixed.

Who had sat like this before me?  Did he squeeze this trigger and shoot these guns?  Had he shot down a Hurricane or a Beaufighter? I had no love for the Luftwaffe, but I was flying with that German pilot in the skies over Europe–touching the things he touched, looking through the same sight he once looked through.  I felt close to The War, in on momentous events far removed from Racine.

The mood was broken by the sergeant, who had returned unseen by me while I was at 3,000 meters over the English Channel in that Messerschmitt.

“Out,” he commanded with a jerk of his thumb, and I hastily obeyed.

As I walked home, I came back again and again to that cockpit and that feeling of participation.”

During his induction into the Wisconsin Aviation Hall of Fame in 2003, Goebel would remark “that was when I knew that I wanted to be a single-seat fighter pilot.”

After the war, the “White Four” Messerschmitt that had received so much attention during its tour of the U.S. suffered the indignity of being sold for scrap and relegated to a junkyard.  After being found by a vintage aircraft collector, the plane was eventually returned to Britain for restoration. Having been beautifully restored to its former glory, this Bf-109 which Goebel sat in as a young man in 1942, is now part of a display at the air museum in Duxford, England. 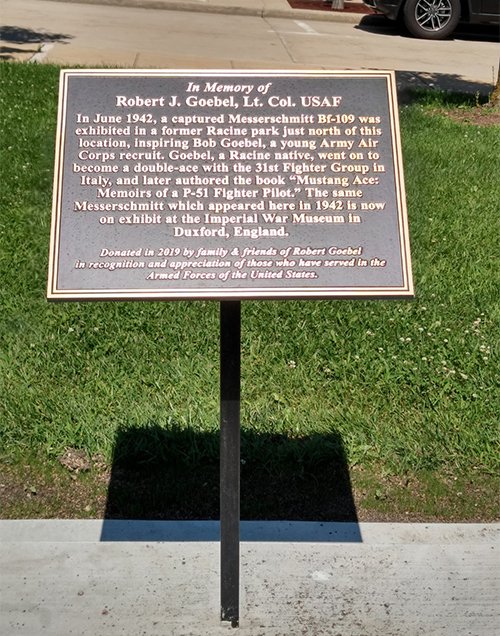 In 2018 the author’s son, Bob Jr., undertook an effort to have a privately funded bronze plaque erected near the location of the 1942 exhibit commemorating the occasion.  The effort resulted in the installation of a memorial plaque in a park-like setting at 6th Street and Lake Avenue In the summer of 2019.

Friends in the Luftwaffe After the War