When Germany invaded Poland on September 1, 1939, Bob Goebel was a sixteen-year-old newspaper carrier for the Racine Journal Times.  The United States would not become directly involved in the war until the Japanese attack on Pearl Harbor on December 7, 1941, prompting many young men like Goebel to enlist in military service.  There were so many pilot candidates for what was then the Army Air Corps that there were not enough military flight training schools. The result was that candidates had to wait for an opening in one of the contracted civilian schools.

While waiting to be called to report for duty, the now nineteen-year-old recruit learned of a touring captured Messerschmitt and went to “see” the exhibit,  which for Goebel meant climbing into the cockpit when the monitor was not looking.

As fate would have it, this Bf-109, which had at one time been flown by a German ace, played host to a future American double-ace.

Later in life Goebel would remark about the exhibit: “That was when I knew that I wanted to be a single-seat fighter pilot.”

(See “A Messerschmitt Comes to Racine“)

Aviation recruits in the central states reported to the San Antonio Aviation Cadet Center.  Although intimidated by the fact that he had no prior flying experience, Goebel possessed the same indomitable spirit and dogged determination of his mother, whose favorite saying was “where there’s a will, there’s a way.”

He persevered, and during his flight training in Texas, Cadet Goebel soon discovered that he had a talent for flying. 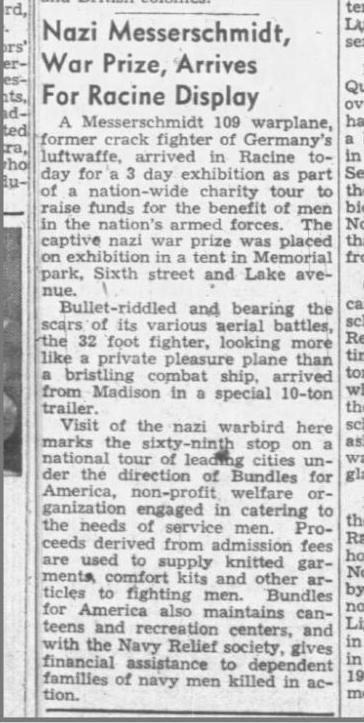 Goebel’s first duty assignment was in defense of the Panama Canal, which, to his disappointment and that of his classmates, was not a combat assignment.  It did, however, allow him an opportunity to gather over 250 hours of flight time in the P-39 and P-40. Although not front-line fighters, the additional flight time put him in good standing for his later combat assignment.

Lt. Goebel and some of his pals from training finally received  a combat assignment with the 31st Fighter Group of the Fifteenth Air Force in Italy in the Spring of 1944.  The Group was in the process of transitioning to the newly developed P-51 Mustangs. The introduction of the P-51 Mustang changed the character of the air war in Europe, as the addition of the fuel drop tanks to the design gave the P-51 more range than existing fighters at the time.  For the first time, allied bombers could be accompanied by fighters all the way to their targets. Goebel’s first victory came on May 29, 1944 during his twenty-second mission as he was leading a flight over Wiener Neustadt.

After the first few missions, I had prided myself in keeping pretty cool in the air. Now I babbled excitedly, and disgracefully on the R/T (radio transmitter), calling for my flight to witness my first victory.

Lt. Goebel wasted no time in claiming another victory, his fifth, on July 20th.  It was his 44th mission, and his first victory in the P-51D.

This victory, my fifth, made me an ace. That was nice, but I didn't feel much different about it than my third or fourth. I'm sure that all combat pilots were aware of the distinction accorded the title, but in our outfit no one put a great deal of stock in it. There was no celebration--not even a handshake or pat on the back from anyone, and I don't remember ever congratulating anyone else on his fifth victory. It just wasn't that important.

Five did make a nice string of crosses on the side of my aircraft, though. With the paint still wet on the latest, I lost no time in having Little Henry take a picture of me in the cockpit. 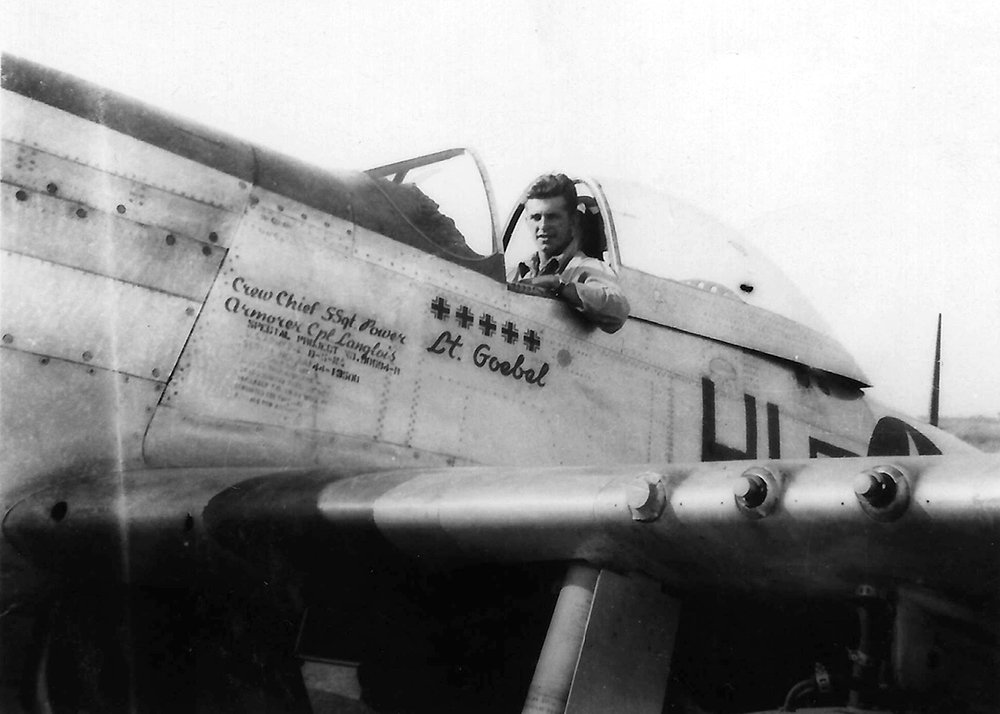 The missions continued, and on his 55th mission in late August 1944 Lt. Goebel succeeded in scoring three victories in one day.  The second involved a situation where the German pilot was likely struck by rounds that were still in transit as he ejected from his doomed aircraft.  The German’s parachute never opened, and Goebel watched as the pilot’s body struck in a field where a Rumanian farmer was busy with his plow horse. The incident momentarily unnerved Goebel, who subsequently spent a half-century of speculation and introspection about it, culminating in a decision to try to identify the fallen pilot.  The results of those efforts are chronicled in a short story penned by the Ace.

After sixty-one missions and a total of eleven victories, Goebel returned to the States as a Major. He was not yet twenty-two years old.
After the War